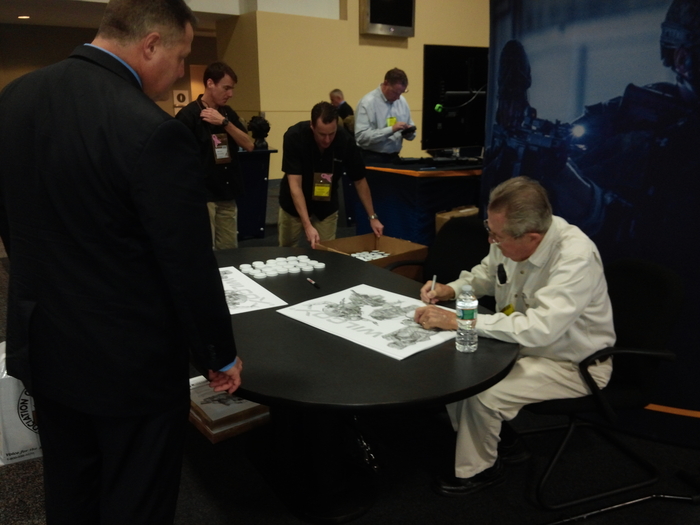 Dick Kramer is proud to announce that he will be signing his artwork at the National Shooting Sports Foundation's 2017 SHOT (Shooting, Hunting, Outdoor Trade) Show.

The SHOT Show is an annual trade show for the shooting, hunting, outdoors and firearms industry, open only to law enforcement and other professionals. Since the first SHOT Show in 1979 in St. Louis, Missouri, the event has grown to be one of the top 25 trade shows in the US. It is the biggest shooting and hunting trade show in the world. In 2017, the SHOT Show will be held at the Sands Expo and Convention Center in Las Vegas, Nevada, from January 16-19.

Dick Kramer will be at booth number 7208, signing the new artwork he recently completed on commission for Wilcox Industries. Wilcox is one of the industry leaders in the development of tactical products relied upon by military, law enforcement, and first responders all over the world. Wilcox applies stringent quality standards to their development process, from design through manufacture. Their reputation precedes them as a leader in tactical innovation and reliability. Their three main product areas are Night Vision Mounting, Hybrid Life Support, and Combat Systems, and in all three categories Wilcox Industries has proven to be an innovator.

Wilcox is the latest of Dick's Corporate Commissions in which he creates great artwork specialized for the products and services of the company in question. He has been universally praised for his attention to accuracy and detail in his work. The skill and precision of his art has been said to capture the essence of a product far more effectively than simple photographs ever could.

Dick and his wife Ginny are honored and thankful to have been a part of countless commissions and trade shows over the span of decades, and welcome you to visit Wilcox Industries at booth 7208 of the SHOT Show to meet Dick, say hello and get a free autographed Wilcox print.

Hope to see you there!